Many of us have tried High Dynamic Range (HDR) photography and found it to be an important tool in the range of digital photographic possibilities.  This technology is wonderful in the respect that it is able to allow the camera to deal with an otherwise impossible range of light, but using it for purposes for which it was not intended can be equally satisfying.

As explanation of the technology, many of us have encountered the classic situation of visiting a church and marveling at the beautiful stained glass windows.  We pull out our camera to take a picture and are disappointed at the results.  Typically, the light coming through the windows is bright to the point of blowing out all details, and the inner portion of the church is dark so that details are lost.  This is because the range of light is too great for the film or digital sensor to properly be captured.

Zone System photographers have the ability to deal with this situation through the alteration of exposure and development, although additional steps must be performed due to the contraction of light values.  Another way of dealing with this situation is to take two pictures, one frame exposing for the window and another exposing for the inner part of the church.  These images are then combined.  This is problematic, as the light from the window in the image exposed for the inside of the church tends to spill into the frame.

HDR solves this problem by taking multiple images with differing exposures, determining which pixels within each image has the best value, and putting them together.  The result is a 32-bit image that is of no use to our monitor or printer - indeed, the initial results look terrible, with blown-out highlights and shadows with no details.  Tone mapping, which is the procedure of converting the 32-bit image into a 16-bit image, is where the magic takes place.

A program like Photomatix offers the photographer a wide range of choices in determining the final result.  The image can take on either a "cartoonish" or a natural appearance, or just about anything in between.  The control given to the artist allows for an excellent representation of their intention.

Photomatix also has the remarkable ability of being able to deal with moving items in the scene, like people and cars.  Although not perfect, I have been able to successfully create panoramic images inside a restaurant with people moving about, as can be seen in the example, Kathy In Deli Dreamland. 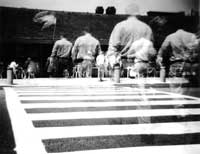 There have been times when in my photography, I have wanted to include movement within the frame.  This can be done with a long shutter speed, which blurs the portions that are moving, but I have had occasion to opt for sharpness.  This can be done through multiple exposures, and examples are my image To The Market - Left.  These were captured by my Holga camera, which allows me to make multiple exposures without advancing the film.  Using a slow film (in this case, Konica Infrared which I rated at EI 8), the non-moving sections of the image combine to a proper exposure, and the under-exposed moving sections offer ghosting. 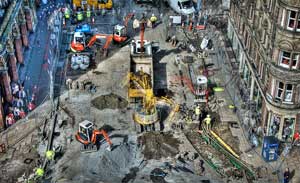 HDR technology can combine these multiple exposures and allow for tone mapping, which helps further define the results.  In the image Construction in Edinburgh, I shot five frames in the span of about two seconds.  Each shot properly exposed the scene.  I then had Photomatix combine the images, indicating to the software that I did not want it to selectively deal with moving objects, but to allow them to all be part of the scene.  Initially Photomatix balked at my request, displaying a message stating that all images were taken at the same exposure, but telling it to continue allowed for the creation of this image. 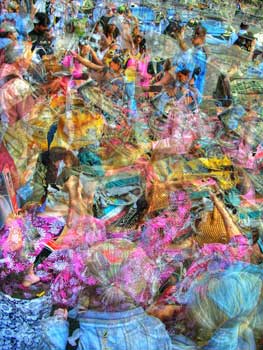 Another example is the impossible situation where multiple images are taken where the camera is drastically moved.  An example of this is Jackson Pollack In New York City.  This is a scene where handbags were being sold on a street corner for $5.  There was a large group of women crowding around the table, examining the merchandise, and holding my camera well above my head, I walked around the crowd taking pictures.  There is no way that a program can combine images that are so dramatically different, but that did not stop me from telling the software to do exactly that.  I tried this experiment with two, three, four, and five images, each one offering their own complexity.  This one was a combination of three images.

So try HDR not only for the purpose for which it was intended, but also abuse the software and ask it to do things that it never considered.  The results could take you beyond your expectations.

A final word.  When I first tried HDR photography, I was using Photoshop, which has this capability.  The results were disappointing due to the limited tone mapping capabilities of the software.  To my great surprise, the latest version, Photoshop CS4, does not improve upon the previous version.  It is my recommendation that if you wish to use this technology, a program like Photomatix will offer the greatest flexibility, allowing for true artistic expression.  Photomatix is available as an evaluation download.